THE LOSS OF AWE

First in a series
by Hud McWilliams

Whichever way we state it, the reality of what the culture in the United States is experiencing in its present context is debate only, pushing toward putting an end to questioning. There appears to be no room or need for dialogue.

I set out to explore with you in this writing the significant and necessary differences between debate and dialogue. However, after some 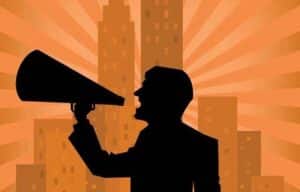 further reading and reflection, I find myself limiting the scope of this missive to only one difference among many and will follow up in future installments with other distinctions. In short, this subject became bigger and bigger the more I thought about the terrible, binary way we have limited our exposure to truth and reality. Meaning God’s reality, one that never changes – even though mankind pretends alternatives exist.

We tend to be a culture of answers, not of questions, and those answers, whether secular or religious, liberal or conservative, or in any setting really, are generally delivered in a manner meant to put an end to questioning. This is the essence of modernity’s peculiar disease.

Alasdair MacIntyre says that the culture of modernity is a culture without wonder, and since without wonder there is no awe, as Plato taught us, and thus, modern culture tends to preclude the experience of that which is most awesome, God. This thinking is why there is no real room for dialogue. The only antidote is to have an inner willingness not to be closed against even the most unpleasant truth that is out of our circle of thought. These truths then are really free from bias, listening to another viewpoint. They are ready to make friends with the other, they are not looking at things through a colored lens that only allow such things to pass into the understanding as not to offend our pride and self-complacency.

In short, to recover the sense of wonder.

Questioning, not as an attack or tactic, but as genuine inquiry or wonder, functions as the most effective antidote to the suffocating, anti-questioning, partial-truth culture in which we now live. In both traditionalist and modernist varieties.

Those who believe themselves to have obtained answers without first having endured the agony of questioning the darkness, whether because they have judged that there are no answers or because they believe themselves to be already quite securely possessed of dogmatic certitude, need to recognize this lack of openness. These attitudes are neither the humble disposition of ignorance nor pious submission to God’s Word, but a type of idolatry – the idolatry of partial thinking.

Dialogue fosters inquiring questions sourced from awe and wonder. Dialogue leans into the mystery and listens. The very things needed for us to embrace the place for which we are made, that of being finite and limited so that awe provides a way into true mystery. This keeps us in our place, the only place from where we access real freedom.

Truly our present misplaced trust in knowledge and information sounds to me a lot like what happened in the garden where relationship was jettisoned for the expected power that knowing was promised to bring.

Dialogue assumes that others have pieces of an answer that together can craft a more complete response not available when you have the “right” answer.

Part of the job of being a Christ follower in any setting is to frame inquiry in such a manner as to expose the ‘truth and reality’ that actually exist. Why? Because exposure was the way we were originally created. And maybe part of the fall consisted in Eve not turning to God and asking an inquiring question so as to avoid the twisted product of the partial-truth that our adversary’s lie represents. Lies need truth to exist.

We are susceptible to partial-truth when we lose wonder and awe and put an end to questioning. Not the questioning in the form of the incessant childish ‘why?’, but rather the growth-oriented fact that when we are asking a true, not trick, question, then we are in the very learning posture where we will never exhaust learning about the Holy throughout eternity.

Remember it is practiced truth that sets us free.

Alongside by His grace,
Hud